I didn't have anything profound to write about today but I decided to do a meme I hadn't seen before, found on Brighton the Corner Where you Are. It looked like fun, and it was! :) 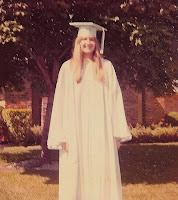 1. Did you date someone from your high school? Yes.

3. Did you car pool to school? No, I walked about a mile, or caught a ride with my dad who left for work about the same time.

4. What kind of car did you have? I didn't have my own car until after high school. I drove my parents car sometimes, a brown 1970 Mercury Monterey.

5. What kind of car do you have now? A silver Jeep Grand Cherokee, plus we have a Ford Edge. Love 'em both.

7. On a Friday Night...where were you then? On a date or babysitting.

8. What kind of job did you have in high school? Car hop at A and W.

9. What kind of job do you do now? After 17 years working at a hospital, I became a school nurse and haven't looked back.

10. Were you a party animal? Not in high school, but I learned to be one after graduation!

12. Were you in band, orchestra or choir? Yes. My best friend and I were the first two girls ever on our high school drum line. I also was in choir, and did a European concert tour with a select choir during my junior year.

13. Were you a nerd? I wasn't a brain, if that's what you mean. I graduated smack in the middle of my class.

14. Did you ever get suspended from school? Never.

15. Can you sing the fight song? Of course. "Go Spartans on to glory, conquer the foe! We'll triumph over rivals, and onward we will go (Fight! Fight! Fight!) Go, Spartans raise that score, for champions we will be. Fight with Might for Double Blue and White! Onward to victory!"

16. Who was your favorite teacher? Mr. Croll, English

17. Where did you sit during lunch? In the main cafeteria except when my friends and I would go AWOL and walk to my house for lunch.

19. Where did you party the most? Like I said, I didn't until after high school. Then we all hung out at Arthur's place, because he was the first one to get his own pad!

20. What was your school's mascot? Spartans, like Michigan State, but we had different colors.

21. Would you do it again? Not a chance. However, I would make some very different decisions about my time immediately following graduation... for instance, I would go straight to college.

22. Did you have fun at the Prom? I wrote about that last year. You can read about it here, and here is a photo from my prom: 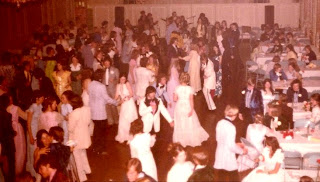 23. Do you still talk to the person you went to the Prom with? I wish I could, but he died in 2002. He and I were always good friends.

24. Are you planning on going to your next reunion? Not sure. I went to my 30th, but most of my friends were not there. I graduated with a class of over 600, so I felt rather alone in a crowded room. Arthur and Kathy were there with me, but I see them all the time anyway! :)

25. Do you still talk to people from high school? My best friend then is still my best friend and lives in the same city I do, plus I exchange emails and/or Christmas cards with a few.

26. What were your school colors? Double Blue and White.

Posts about Widowhood, Grief and Healing

Some of my Favorite Reading